Originally my husband Michael Stimpson was responsible for me joining The Morris. When he started Morris I said “ If you think I am going to do that, think again !” In 1978 I was set up one evening to attend a practice of Lord Pagets Morris a female Border Side, I never looked back.

I started as a musician with Phoenix Morris in 1985 when they were a male only Side. Then in 1987 Phoenix went mixed – partly my influence- much to the annoyance of many single sex Sides at the time. So I became a dancer. We persevered and grew from strength to strength to where we are today – a popular well established Morris Side.

First Dance Out:First ever dance out with Lord Pagets Morris up at Dawn on May Morning 1979 on Uxbridge Common.

First dance out with Phoenix Morris as a mixed Side May morning 1987 Cassiobury Park with Pump House Clog followed by breakfast back at the Pump House in Watford .

Favourite Morris Memory: There are so many over the years. One that comes to mind is dancing a very lively Upton upon severn Stick Dance on the glass tiled stage at the Britain’s got Talent Studio. We had huge cheers from the acts waiting to audition, I was buzzing with pride. 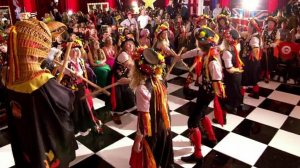 Another memory that comes to mind a few years ago was spending a weekend dancing in Viry France organised by Merrydowners Morris. We all had a wonderful weekend.

Favourite Dance: I might be biased but I love Phoenix Waves one of our own dances, followed closely by Upton upon Severn Stick.