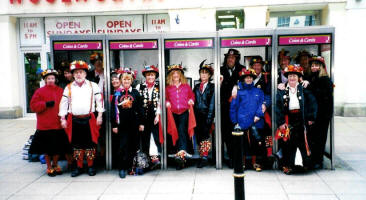 Phoenix at Cheltenham in the early 90s

The history of Phoenix Morris goes back to 1952 when a Morris Side was formed in Finchley, North London at the Phoenix Folk Club.

The Side was formed from members of the folk club (we understand from the members of at least one Side which had ceased to exist but we have no information on this) and carried on until 1957, when it in turn merged with another group, which subsequently over the years moved and finally settled in Watford. Here it prospered and grew until 1981, when a series of meetings were held between the members of the Side concerning the direction the Side should be taking in the light of modern developments within Morris.

During these many meetings there was a full and frank exchange of views, but this resulted in no useful conclusions. Eventually many members left the Side, some to join a new North-West Side that was being formed in Enfield called Old Bull (this side moved to the Watford area a few years later but disbanded in 1991).

The officers renamed the Side Phoenix Morris (taking the name of the original Side). Phoenix Morris continued happily for a few years, although short of men, and an attempt was made to set up a parallel women’s Side to dance Cotswold in the area. Unfortunately, however, this failed, and most of its members left to join Lord Paget’s Morris in Uxbridge.
During this period (late in 1983) we relocated our practice nights to Rickmansworth.

Presenting a Cheque to Mt Vernon Hospital in the 80s

Our kit, at this stage, was black shoes, red socks, black breeches with red belts, grey shirts, red and yellow armbands and bell-pads, and brown bowler hats decorated with flowers.

A year later, another attempt was made to set up a parallel women’s Side, this time more successfully. However, due to a shortage of dancers for the women’s Side, it was agreed that the Side should dance mixed for a year to enable the women’s side to recruit sufficient numbers to dance separately.
The intended split never occurred, and today Phoenix Morris is still a mixed side; in fact, the men are outnumbered by the women!
Phoenix was the first Side in the area to become a mixed-sex Side, but since that time a number of other Sides have followed suit and now there are more mixed sides than single-sex Sides. Although there is no recorded history of Morris Sides being mixed, there is no evidence to the contrary either. There are photographs in existence of all-male Sides in the late 1800s with some very odd-shaped men in the set. What is clear is that, if it were not for the women’s Sides, there would be no Morris, today and any male Morris dancer who says women should not dance Morris has not studied the history of Morris.
The intention of returning to a joint side has now been abandoned, although we do dance some dances single-sex from time to time.

In 1992, we had grown to over thirty members in the Side. As 1993 marked the side’s 10th year of dancing in Rickmansworth, we celebrated the event with a weekend of dance combined with the Rickmansworth Canal Festival which was celebrating the 200th Anniversary of the granting of the Act that enabled the Grand Junction Canal (now part of the Grand Union Canal) to be built. By 1995 the Side reached its largest size, with 45 members. In 1998 another merger took place when Halfcut Morris, a canal Side from Uxbridge, joined Phoenix and brought its dancers and dances to strengthen the Phoenix repertoire.

Despite this merger, with Side members moving from the area and leaving for other reasons, we were reduced in size to 21 dancers and four musicians, but the Side has gradually grown again and in 2010 we had 30 dancers and musicians ranging in age from 21 to 70!

When the Morris Ring opened it’s doors to mixed and women’s sides in 2019, we became the first side to belong to all 3 morris organisations – Morris Ring, Morris Federation and Open Morris.

Our kit has evolved: the brown bowlers have been replaced by black half-hats and the shirts are now red-and-white striped. We have added a black waistcoat with a very fine Phoenix badge on the back, and wear red belts. It has now stayed this way for over 20 years.

The kit is decorated with flowers on the hats and badges on the waistcoats, plus red, yellow and orange ribbons on the arms and hats. We perform the dances using sticks or red hankies.