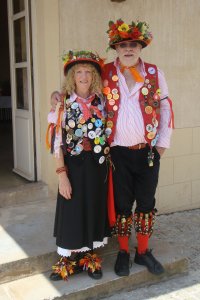 How I joined: My wife, Sue, and I lived on a narrow boat for the first 14 years of our married life and quite early on, 1977 or 8, we were at a boat rally on the Slough Arm of the Grand Union Canal. This is where I saw Grand Union Morris.

I thought “I would like to try that”.
I went along to their practice hall in Uxbridge and soon got the hang of the different dances, got my kit and started dancing out.
My wife said “you will never catch me doing that” but it was not long before she joined Lord Pagets Morris who also practiced in Uxbridge.
A few years passed and, for a number of reasons, I left Grand Union and joined Phoenix Morris. Our Bagman (Secretary) had to give up so I took on that role. A few years later our Squire (Chairman) had to give up for health reasons and recomended to the Side that I take his place,
With a short break of about six months I have been Squire of Phoenix ever since.
First dance out: My first dance out with both Grand Union and Phoenix was so long ago I am unable to remember either of them!
I do remember our first dance out which resulted in Phoenix going mixxed. We had set up a seperate girls Side and on May morning in 1987 we danced out at 4am on Chorleywood Common. Only five girls made it and Denise, the Squire, came to speak to Pat, our Squire, and said “can we dance with you?”. We decided that, as there was no one watching, it would be OK. We have danced as a mixed Side ever since.
Favourite Morris memory: My favourite Morris memory could be one of many but I think our trip to France to dance at a village fete being organised by Brits living in the village.It was a great weekend. 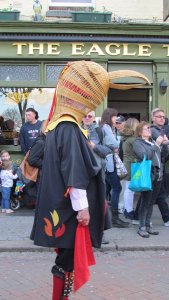 Favourite dance: Again difficult. I think Muskets in the style of Bleddington taught to us by the Minisota Morris Men on a tour of England in exchange for us teaching them one of ours.